“ AULIB” Honors the Brilliant Students in the Lebanese University 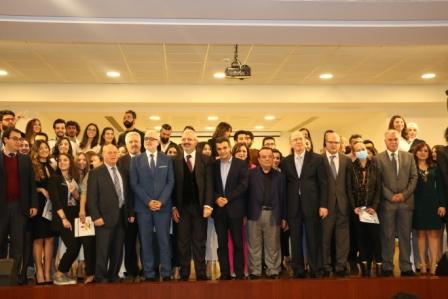 As every year, the “Amis de l’Université Libanaise” association (AULIB), member of the “Ora” Union (which includes the following associations: l’Union Catholique Internationale de la Presse-Liban, Labora, les Amis de l’Université Libanaise, Groact), honored the brilliant students in the Lebanese University, in the theater of Jdeideh municipality, and the President of “Ora” Union, Father Toni Khadra, as well as the President of AULIB association, Dr. Antoine Al Sabah, and the administrators of the faculties  of the second branches of the Lebanese University, the President of Jdeideh-Baouchrieh municipality, Antoine Gebara and a crowd of students and parents attended it.

The ceremony opened with the national hymn, and it was presented by student Maryam Al Biri who said that “the Lebanese University” graduates future generations that are constructive in their society and an example in different sectors and fields, and we see today the “Amis de l’Université Libanaise” association honoring students of the second branches who are specialized and brilliant in its different faculties, under the supervision of professors who shared more than what a student dreams to receive from their learnings, thoughts and visions”.

She added “it is an honor that the “Amis de l’Université Libanaise” wanted as a yearly meeting, and here it is organizing it for the fourth year in a row, to shed light through it upon the importance of striving to success and achieving it. The national university, and in spite of the various challenges it faces, is still graduating innovative capacities thanks to the cooperation of its society, such as professors, students, friends, parents and supporters, so its graduates hurry to the national and international job market to be distinguished and proficient, and hold the most important educational, economic, financial, medical, engineering, legal, scientific and informative posts forming an added value wherever they work”.

Then the brilliant student Valerie Daoud delivered a speech in the name of the students and said “it is not enough to achieve success and distinction, but to continue as such in all the stages of our life so to remain successful and brilliant”.

She pointed out to “the role of the university, the professors and the employees in striving to innovate our university that represents Lebanon nationally, regionally and internationally; since it is only estimated by its scientific level and the quality of the students who graduate from it”.

She also praised “the efforts and hardship made by the university professors in order to lead the students to the highest and most important posts. These professors are an example of success, and they have a vision, a distinction and an innovative way of teaching”.

During her speech, Daoud said that “the students of the Lebanese University do not reach success and distinction without passing by some stages that are tiring and exhausting, but that give them hope and teach them perseverance in order to achieve their goals. The student among them who succeeds with distinction is the one who has invested his time and had a will, courage and a vision”.

She also thanked the parents “for the role they play in supporting their sons since their childhood until they reach the stage of adulthood and distinction”.

She ended her speech saying: “me and my fellow graduates feel proud of being graduate students from the Lebanese University that is distinguished by being the real cultural and social instrument for the Lebanese youth, and the national place for all the categories of the Lebanese people, and we desire to thank the Amis de l’Université Libanaise association that organized this celebration to encourage the brilliant Lebanese youths that guide all the young men and invite them to join the Lebanese University that opens for them the doors of the prosperous and successful future. We also thank our professors and the administrators of our faculties for all the efforts they made to lead us to success and distinction we have reached today, and to our dear parents for their support and perseverance by standing beside every one of us, and to the entire audience and to everyone who strived, by this celebration, to make every student feel that his hardship, the price of his distinction, was not fruitless but it was highly estimated, which allowed us to be happy with you in these few moments crowning our happiness with thankfulness to you all”.

The Prof Dr. in the faculty of health Fadi Assily delivered a speech in the name of “AULIB” asking the officials of the country to “take more care of the Lebanese University, the university of the country, the mother of the poor as they say, and to contribute more and more in giving it her share of the budget and to add to it instead of subtracting from it 50 billion LL as they did in 2018.

He considered also that “the Lebanese University has its place and specialization in this society”, and he added “we dream of innovating its programs and modernizing new faculties and sections that are updated about scientific and technological progress and development such as Robotics “and all that we call biochemical and petroleum engineering…and if we look around us, we see that the United States, for example, spends 118 billion dollars on Robotics and China around 44 billion dollars, therefore we want the students of the Lebanese University to be updated about new innovations and precursors in these fields because materials are all that we need”.

He hoped that “the Lebanese University re-gives separate scholarships to brilliant students”.

In conclusion, he said “we suffer with the central administration in the Lebanese University from a slowliness in the transactions which pushes the administrators of the faculties to follow their transactions and pursue them, and spend most of their time in this, distracting them from their academic work”.

In the end of the celebration, the faculties’ administrators, as well as Father Khadra, Doctor Siyah and Gebara gave the shields of honor to the students, took commemorative photos and met with the parents of the brilliant students.

Our vision is to secure a decent work, a sustainable and stable income to ensure the healthy diversification of the Lebanese Community and work to encourage Lebanese individuals to have an effective contribution in the nation building through public sector institutions.